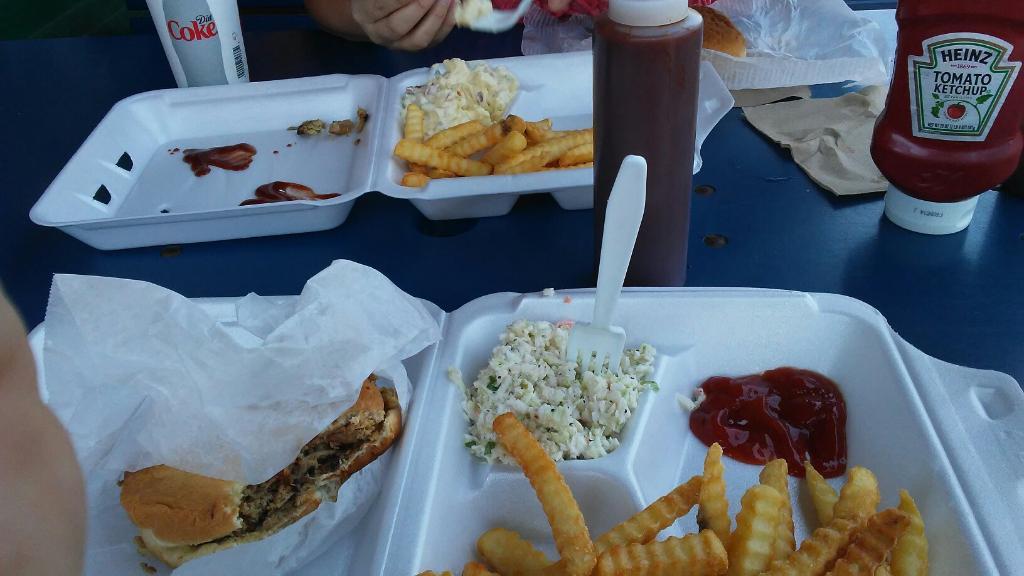 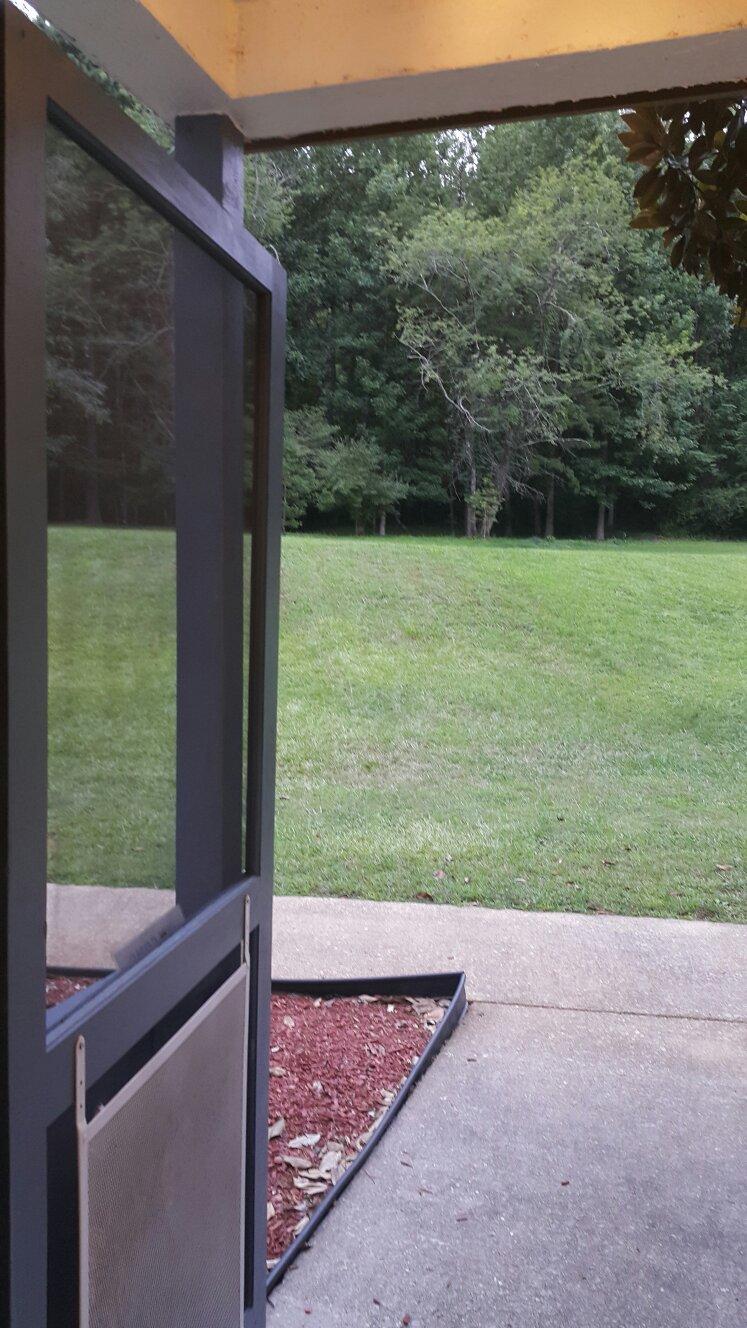 What's in the "Brunswick Stew" ?

I don't know every single ingredient but it has corn and pork. It's the best around.

What is the cost?

Best hole in the wall bbq place in GA with fair prices, I'd eat there every day if I lived there

Price of a cheeseburger?

Pretty sure they don't serve burgers. The bbq is amazing! You'll want to savor every bite! They have several house sauces and the potatoe salad is delicious! Just go eat there... you won't regret it!

The meat is very tender and they give you just the right amount of sauce. Definitely recommend going here if you're ever in helen and in the mood for some bbq

Excellent food and service. Outside seating is great.

Food is good, atmosphere is nice. Just not enough french fries given on their plates it's a small handful for a price you pay.

Tried the hot pork stew and the smoke chicken wings, they huge.

Not good BBQ. meat was gray blan wife had salad and it looked like something you would get off the dollar menu at fast food restaurant.

This place has really good barbecue! We had the brisket, ribs, and some mac & cheese. Everything was really tasty and we enjoyed it immensely. It’s good to have a barbecue place so close in town. Try it you’ll like it!

After having eaten Brunswick stew all up and down the east coast, I swear this place has the best by far!! The base had more of a BBQ sauce flavor whereas most other places have a tomato taste!! Highly recommend this place!!

Had the pulled pork plate, family had bar-b-q chicken. Both meals were excellent. The Brunswick stew was very good and service was speedy. Lots of sauce choices and ability to mix it up ... like sweet, coupled with hot ... add big glasses of sweet tea and Texas toast and you have a meal!

This place was quick and easy and the food is great. The portion size for the sides is small but it was still good. A few sauces to choose from as well.

I consider myself a rib afficinado, and theirs are the best I've ever eaten anywhere on planet Earth. They are meaty and falling-off-the-bone tender, with delicious smoky flavor. The wings are also spectacular -- extra large and meaty wings are smoked, and then flash fried (I think), which results in a smoky and crispy bite. Get ready for this place to have lines out the door once word gets out. It is absolutely that good!!

If your expecting Texas BBQ turn around, if you like sauce then you found your place. Get the ribs they are good. 4 stars for bbq in this state. 3 star if it were in Texas.

I started going here when it opened but moved away 4 years ago. My first time back was a couple weeks ago. I asked if it was the same owner and they said no. Luckily, everything tasted great as usual. The pork was perfect. It had a smoke ring and wasn't too dry or too moist. The fries taste like the ones they've always had. Keep up the good work.

very good place, the food is prepared by hand and that gives it a different flavor, of course we will return.

Okay the slaw taste bad like it's old. My husband got sick a few hours later. I ordered Brunswick stew it wasn't hot, never again.

I came because of the positive reviews. I was disappointed by the food because it was just average. The chicken was dry and needed a lot of sauce. Overall an okay restaurant but overhyped.

Ok. I was really down in the dumps about this place called Helen, GA until I pulled into the gravel driveway of N.GA BBQ. Now mind you I know BBQ, being I am a "smoker" myself. I knew that it had to be good, no frills or fireworks to the decor, and my judgement was spot on. There was absolutely no need for sauce on the ribs. They were as tender as they needed to be. I hate fall off the bone tender and these were not. Pulled pork sandwich was on point. The only thing I would suggest is trade your fries for slaw if available. This place will see me again before I leave and because of this place Helen now has my stamp of approval. This should be your 1st stop when trying to find something to eat. You will not be disappointed

Our all time favorite. We live in Sautee and when family visits, North GA BBQ is always what they want. We don't like overly fatty BBQ, and theirs is the leanest in the land ! Sweet sauce is the best we have ever had.

We have eaten here several time and we love it! We always eat lunch here as soon as we make it town. There’s a variety of different meats and sides. Their baked beans are good and their fries are nice and crispy! I love the ribs and Brunswick stew. They make stew how it SHOULD be made! Recommend to everyone who loves good barbecue!

No root beer here. The BBQ sandwich was great.

One of the best Barbeque Places I've ever been to. Amazing food. Keep Up the Great job guys.

Absolutely loved the food, the ribs were so delicious, mmm.... Fast service, too!

Average, at best.We were drawn in by the 4.5 rating. There are only 2 explanations for such a high score: it was post-pub/beer bike event, or rated by famished tubers who didn't eat prior to their river run. At best, it's average barbeque with average sauces from plastic squeeze bottles. Not bad -- just average.

Its one of those home made food places, Order the pork bbq, The chicken is alright. But Pork plate is really good.

My top 3 takeaways from this restaurant: 1. One of the least expensive restaurants in town2. Good food3. Fast service * Note: Only outdoor seating (covered) available, but there is plenty of it

My wife and I were very excited to eat here. We walked all the way here from the other side of town in the cold to find out that it was closed. Walked 360 around the restaurant only to find signs that reaffirmed that it was in fact open. Google maps also shows open even now. I cannot attest to the food; however, they need to realign this misleading information to reflect appropriately.

This use to be a great place to eat. I can’t believe the owners have let the bearded wonder take over. Food is different and not so good now. Every time we come they are out of something and today they were out of three things. Use to be a friendly atmosphere but not anymore. Hate to see a great place for over 20 years go down hill like it has. Very disappointed. We have been coming to this place for a long time. When we got married this was the food we served at our wedding. Wouldn’t be today.

The ribs were outstanding...loved the tangy KC style sauce as well.

We love stopping here on our way to NC! It is by far some of the best Bar B Q you can get any where. Our regular order is a quart of pulled pork, buns, potato salad, cole slaw and you can not forget the banana pudding some of the best I have ever had. I’ve had others items on the menu and you can’t go wrong with anything! Make it a must to eat here or get it to go like we do if you are staying in Helen or just passing through as we do. The outdoor eating area is a nice relaxing place to sit and enjoy your meal. You will not be disappointed! Can’t wait for our next stop at this delicious establishment!

Ribs were unreal. Stew was good. Plenty of hot and hotter BBQ sauce options along with the typical Sweet, Tangy, Original. Banana pudding was out od this world! Kids split a piggy melt and LOVED it!!

Good inexpensive BBQ. Counter Service was not really what I expected. Short and not very welcoming. Very busy place, but no excuse for poor counter service. Hopefully they make changes.

OMG. The very best. Ribs melt in your mouth. Staff is great.

Fabulous bbq joint! As a southerner my expectations are always high and they exceeded them. We both got pulled pork sandwiches and fries. Hot bbq sauce was great but the sweet was even better! I loved that you add the sauce to your sandwich as needed instead of it coming already smothered. You really get to experience the flavor of the meat itself. The music here was right up our alley and it’s a major plus that it has its own parking. Service was fast and friendly. Couldn’t ask for better.

Go! You will not be disappointed! Pulled Pork was so tender! Good sauces, too!

Highly recommended. Delicious food served in large portions with a reasonable price. No frills restaurant woth outdoor seating that doesn't skimp on quality or service!! Looking forward to the next visit.

Went around 530p on a Saturday. Pros- service was pretty fast, portions are generous, staff was cordial, 6 minutes from downtown Helen, sauces were tasty. Cons- potato salad had too much dressing, baked beans were very average, ribs were chewy and not in a good way-they seemed like they could have used more cooking time. I like my meat with a little char or bark-maybe they we're smoked instead of grilled. People before me ordered sandwiches, maybe I should have went with that.. I've had better BBQ.

Love the BBQ here!! Was very disappointed when I was told they do not have Strawberry cheesecake pies anymore. Their supplier needs to get a grip on that...lol

An absolute must-eat. Some of the best barbecue in North Georgia. Still dreaming about the pork melt I ate with that heavenly ranch barbecue sauce. Skip the busy wait times at the other restaurants and go here instead.

Good food. Our pulled pork was a little dry without the sauce, but pretty tasty. The larger sandwich was big; we cut it in half for two of the kids to share (with hand for scale).

They guys who run it are absolutely wonderful. They dont serve alcohol so this may + or - for you. Ribs are good,coleslaw is lacking. $25 for a rack of ribs. Its not bad its comfortable environment with outside seating so social distancing is achievable. It has room to improve but its good.

My family have been going here for years. Always good, we normally get a rack of ribs and a large fry and split it. The last time I went and tried a pig melt and it was very good. I have also tried there stew and it's good as well. We have made day trips just to go eat there, we live about 2 1/2 hours away. If that tells you anything.